The commercial district on the Isle of Palms is getting a face lift.  The most notable of this lift includes the demolition of the more than half-century old Red & White Grocery store, which has been welcoming bare footed shoppers for years.  The Red & White was your typical locally owned rusty, sandy, grocery store where boogie boards and sand toys were more common than organic vegetables and fine wines. 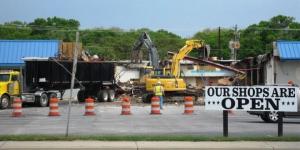 Newton Farms on the Isle of Palms

While change has come with controversy from long time Isle of Palms residents, many will agree that it was only a matter of time and consistent with the changing demographics of the Isle of Palms.  You see, we are in a time of fancy.  People want nice, luxury, vacation homes.  People want the trendy organic food, craft beer (Miller who?), foreign cheese, health written all over it grocery stores. Just ask Whole Foods.

I will admit, I am actually excited about the new grocery store that will be known as Newton Farms.  Don’t get me wrong, the Red & White served some killer fried chicken, dogs, and sides, and all for under $5 bucks.  But hey, now I can get a turkey wrap stuffed with goat cheese, lettuce, tomato, and organic farm grown bacon and 6 pack of my favorite craft brew.

Read the latest:  Newton Farms on the Isle of Palms to be a Harris Teeter?